Amnesty International interviewed 55 people – 39 men and 16 woman – who were detained in internment camps in Xinjiang since 2017. These former detainees provided a broadly consistent description of life in the camps. The vast majority of them were detained for between nine and 18 months; many were detained in two or more camps.

From the moment they entered a camp, detainees’ lives were extraordinarily regimented under conditions that are an affront to human dignity. They were stripped of their personal autonomy, with every aspect of their lives dictated to them. Detainees who deviated from the conduct prescribed by camp authorities – even in the most seemingly innocuous ways – were reprimanded and regularly physically punished, often along with their cellmates. 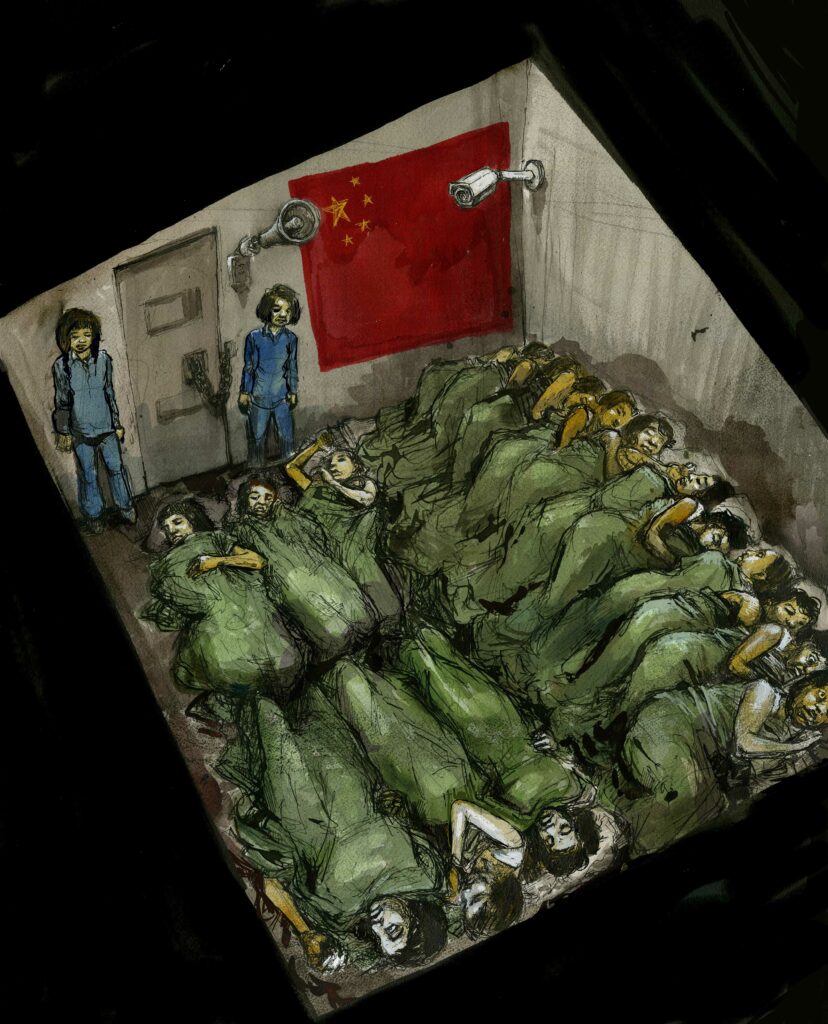 Two female detainees stand “on duty” monitoring their cellmates while they sleep.

Detainees had no privacy. They were monitored at all times, including when they ate, slept, and used the toilet. They were forbidden to talk freely with other detainees. When detainees were permitted to speak – to other detainees, guards, or teachers – they were required to speak in Mandarin Chinese, a language many of them, especially older people and those from more rural areas in Xinjiang, did not speak or understand. [[[Amnesty International interviews.]]] Some detainees were physically punished if they spoke in a language other than Mandarin. [[[Amnesty International interviews.]]] The camps were set up so that it was impossible to practise religion, and former detainees said any sign of religious practice was punished. “We can’t even touch our face, or they would suspect us of praying,” Azizbek said. [[[Amnesty International interviews.]]]

Detainees were constantly evaluated. According to former detainees, as well as to the leaked government document known as the Telegram, detainees were given scores reflecting their “ideological transformation, study and training, and compliance with discipline.” Detainees’ behaviour affected their scores, which in turn factored into the treatment they received in the camp, including “rewards, punishments, and family visits”, as well as the timing of their released. [[[The Telegram (previously cited), para. 2.]]]